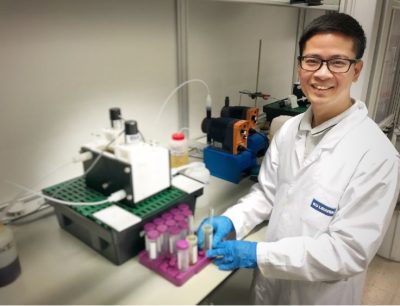 Within the frame of the PLATIRUS project and as a result of a strong team work, Johnson Matthey, KU Leuven and VITO united forces to succesfully implement in mini-pilot scale a flowsheet for the recovery of PGMs from autocatalysts. Using ionic liquid technology KU Leuven has succesfully separated and purified Rh, Pd and Pt from the pregnant leach solution produced by VITO.

The continous solvent extraction processs was carried out using a total of 12 mixer-settlers (0.48L capacity in the settler per unit).  Liters of individual solutions of these PGMs were produced at KU Leuven and now are being further processed at KU Leuven, VITO and TECNALIA to generate the chemical compounds required for the preparation of new catalysts by MONOLITHOS.

Picture on the left: Viet Tu Nguyen from the SOLVOMET group in KU Leuven carrying out the extraction of PGMs to an ionic liquid phase.